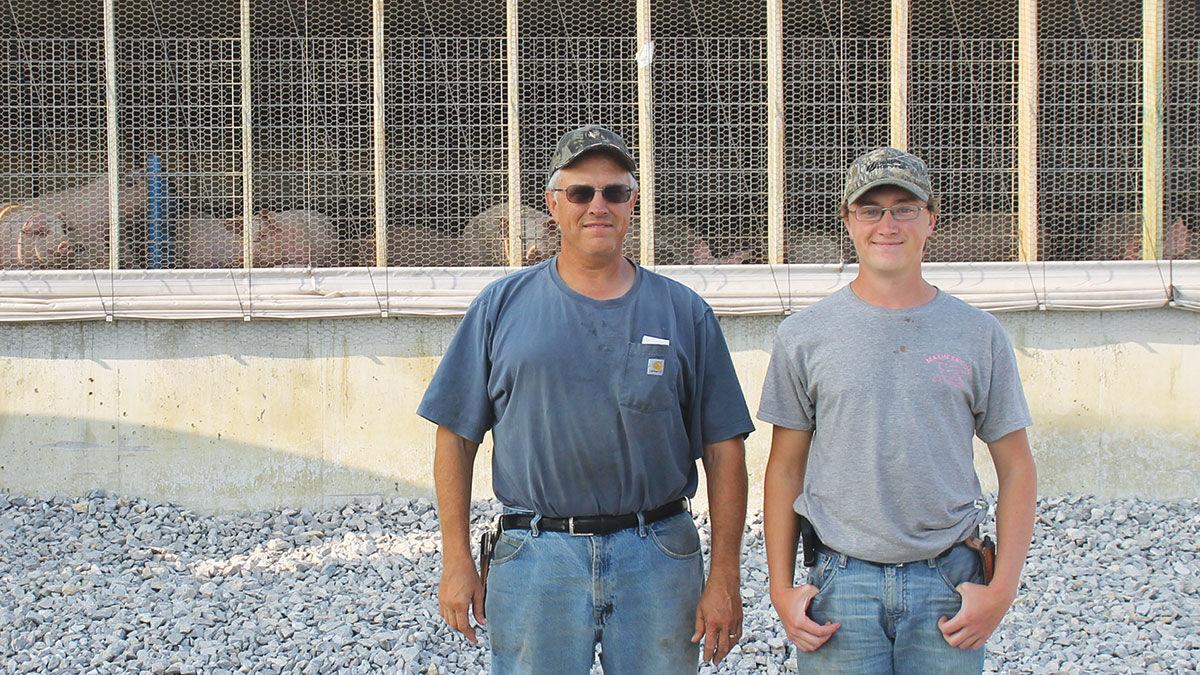 
MILFORD, Ill. — At age 22 in 1991, Charles Leitz, one of three children growing up on an Iroquois County farm in eastern Illinois, graduated from Southern Illinois University and started farming with his father, Robert.

At age 22 in 2020, Ben Leitz, also one of three children growing up on an Iroquois County farm in eastern Illinois, graduated from Southern Illinois University and started farming with his father, Charles.

However, as agriculture has changed, and with 2020 bringing extra challenges, the first year farming for Ben is decidedly different than his dad’s.

Instead of celebrating his graduation with friends this year, Ben finished his classes online and was already working long hours in the barns and on the farm while doing classwork in May.

By the time Charles started farming, the operation was all corn and soybeans. Last year, the family decided to diversify and add livestock back into the mix to allow Ben to join the operation. They built a high-tech hog finishing barn on the land owned by Ben’s grandfather, Robert.

“I wanted to come back to the farm, but we didn’t have enough acres,” Ben said of the family’s roughly 1,000 acres of corn and soybeans.

Ben studied both livestock and crops at the university before deciding raising pigs on contract would be a good option for them. They also like having the manure to supplement fertilizer needs for their crops.

Ben’s two younger siblings are interested in other careers. Brad is studying horticulture to work on golf courses, and Lyndsey is studying to be a math teacher.

Being a pig farmer has been enjoyable “most of the time” this year, Ben said. It wasn’t much fun when COVID-19 hit the meat processing plants at the same time as father and son were ready to market their first round of pigs in the spring.

Although they are contract growers with The Equity in Effingham, they still felt the impact of marketing challenges. Processing slowed but pigs were still growing to market weight as the usual pace.

“We had to raise the temperatures in the barn and change the feed rations to slow their growth,” Charles said. “They were hot, not happy.”

That was the lowest point.

“We were fortunate we didn’t have to euthanize any pigs,” he said. “We felt terrible for those who did.”

Father and son agreed the support they get from The Equity — with specialists in raising young pigs and managing the impact of COVID-19 — was a great help.

Pressure washing the barn between groups of pigs, which takes about 100-man hours, is Ben’s least favorite part of the operation. But it precedes his favorite part “when the babies arrive.” He likes working with the little pigs, sorting them and getting them growing.

“It’s so cool when we get the babies,” Ben said.

“They are cute,” Charles agrees.

The pigs arrive weighing about 12 pounds each in one and half semi loads. Five months later, after Leitz’s hard work, it takes between 23 and 26 semi-trucks to transport the 280-pound mature pigs to market. Their second group of pigs arrived on June 13 and will be ready to go to Tyson Foods processing in Indiana at Halloween.

Bumps in the road

“We took heavy losses on open pigs,” he said, and he’s hoping to make up some ground this fall.

“We never had to deal with this before,” the seasoned southwestern Illinois farmer said. While Ben experienced this “wild ride” in his first year of production, Weitekamp said, “hopefully he will never have to do it again.”

“Farmers are making adjustments on the fly,” he said.

Even after the bumpy year to start and the stress involved, Ben said “most days” he is glad he decided to be a pig farmer.

Soon it will be time to agitate manure in the pit and get it ready for application by injection in their fields. This includes evaluating the manure and soil testing, arranging for application and letting the neighbors know in advance there may be some smells for about a week.

All in all, they said there has been good understanding with the community. They held an open house in November 2019 with their suppliers, the Illinois Livestock Development Group and Illinois Pork Producers Association staff on hand to answer questions for about 100 people.

The Leitz family also welcomes FFA and other groups to the farm to educate them about what they do. Ben especially takes pride in talking to people about modern pork production.

“I enjoy explaining it,” he said.

Oct 04,2022
The Equity is pleased to announce that as of October 3, 2022, The Equity Farm & Home Store will open a second location. We will be operating in the former Home Center store located at 4 Do-It Dr, Altamont, Illinois that was owned and operated by the Mathias family for many years in the Altamont community. After many years in business, the Mathias family decided it was time to exit the retail business and felt it was a good transition to sell store inventory to The Equity who was already a member of the Do-It-Best franchise family and has a reputation for serving customers in our rural communities.
May 06,2022
The Equity is pleased to announce the acquisition of Beverlin Oil company of Newton, Illinois. The Beverlin family and it’s employees have built this refined fuels delivery business on a commitment to service since 1976. The business is comprised of about 2,000,000 gallons of refined fuels annually.
Jan 27,2022
Greg Taylor, Director of Agronomy Operations has recently been appointed the position of Chairman of the Board for the Illinois Fertilizer & Chemical Association.